In 1975 the Doobie Brothers released their fifth album, Stampede , a Top 5 seller containing Pat Simmons’ epic “I Cheat the Hangman” and the dance floor favorite Motown cover “Take Me in Your Arms (Rock Me a Little While)” which just grazed the Top 10. Simmons and Doobie Brothers prodigal son Tom Johnston join me In the Studio in this classic rock interview, a prequel to their long-anticipated virus-delayed induction into the Rock and Roll Hall of Fame.

By the time the Doobie Brothers’ fourth album, What Were Vices are Now Habits  , was released in early 1974, their third, The Captain and Me   a year earlier had proven that 1972’s Toulouse Street   and the hit “Listen to the Music” were no flukes. The Doobie Brothers went from playing bars around their native San Jose and San Francisco Bay Area to theaters and small halls across America. “Another Park, Another Sunday” was chosen by the band’s record company as the first single from Vices…/Habits  , but it stalled at only #32. Despite the seemingly unstoppable groove of the next single choice, “Eyes of Silver”, featuring the infectious soul of the Memphis horns, it failed to even make  it past #52.

Then a remarkable thing happened when an album track from Vices…/Habits   received considerable airplay on the  progressive rock FM radio stations which were growing in popularity. Never intended by the Doobie Brothers’ record company to be a single ( it had been the “B” side to “Another Park, Another Sunday” eight months earlier, in fact ), “Black Water” revived the dismal sales picture, becoming the band’s first #1 song and eventually selling over one million copies of What Were Once Vices…Habits . 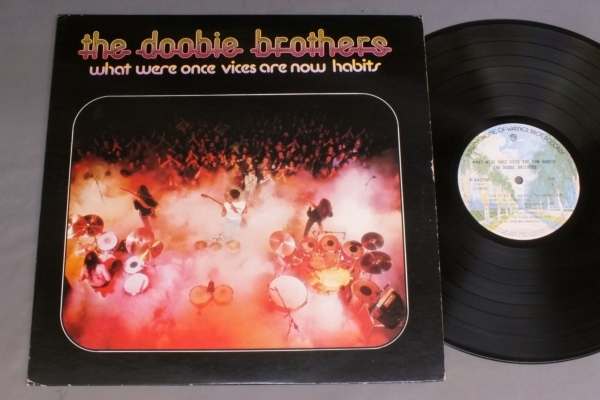 Patrick Simmons, singer/ songwriter/ guitarist and the only musician to appear on every Doobie Brothers album and tour in their fifty year career, told me in this classic rock interview, “For us at that time, we were just plain lucky.” The surprise success from “Black Water” afforded the band some creative license on their next album, Stampede,  released in April 1975. There is the Jack Kerouac On the Road -themed “Neal’s Fandango”, the sweeping energetic take on the Holland-Dozier-Holland songwriting juggernaut’s Motown hit for Kim Weston, “Take Me in Your Arms (Rock Me for a Little While )”, which made it to #11 for the Doobie Brothers; and several big name guest musicians helping to make Stampede the best sounding Doobies album to date. But as you will hear from Simmons, Johnston, and the late Doobie drummer Mike Hossack, the non-stop grind of five years of one-nighters, stopping only long enough to record the next album, was starting to create stress fractures in the foundation of the band which  would sideline Tom Johnston with a bleeding ulcer and, ultimately, alter the sound of the Doobie Brothers for the next decade. –Redbeard