Until the day that he died in January 2016, Eagles co-founder Glenn Frey was exceedingly proud of  their second album, 1973’s Desperado . Purely in popularity and chart stats, that sophomore record had the lowest glide path of any Eagles effort, yet in this exclusive In the Studio  interview Frey and original Eagles bass player/ singer/ songwriter Randy Meisner make a detailed case for why Desperado  may be the most important one of all.

Desperado  did not have three Top 20 hits like the debut, nor did it contain the Eagles’ first #1,”Best of My Love”, that distinction belonging to 1974’s On the Border  album, which marks its forty-fifth anniversary currently. The dedication to songcraft which is evident from the first note of “Doolin Dalton” on through “Tequila Sunrise”, “Certain Kind of Fool”, “Outlaw Man”, “Bitter Creek”, and the timeless “Desperado” would later bear bountiful fruit for Frey, Meisner, Don Henley, and Bernie Leadon on the Eagles’ 1975 #1-selling One of These Nights , their first album to soar that high, a cosmopolitan country/ R&B hybrid that generated three Top 10 hits and effectively founded uptown Modern Country music as we now know it, fundamentally changing the course of contemporary music. Hotel California  in 1976 and The Long Run  in 1979 closed out the Seventies in colossal fashion for the Eagles, remaining undiminished deep into the 21st Century. 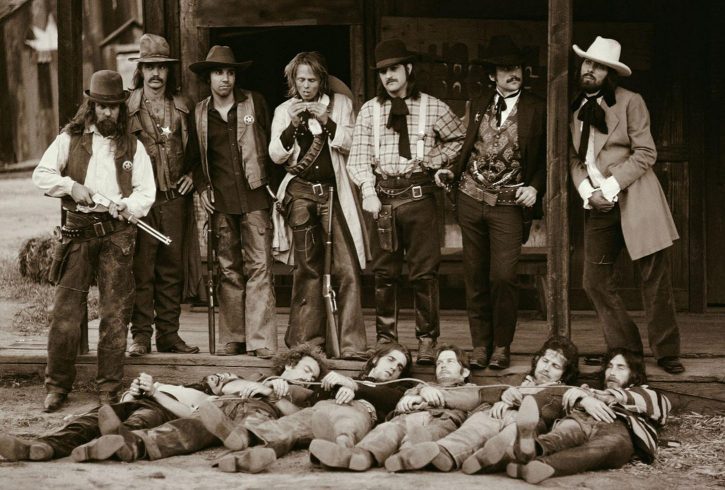 But in this interview Glenn Frey waves off the initial success of the first album to the songs of Jackson Browne, Jack Tempchin, and beginner’s luck, and places the later record-setting success of The Eagles hinging on his 1973 decision, along with band co-founder Don Henley and songwriters Browne and J.D. Souther, to write a cinematic “cowboy concept” album. Heavily researched and historically accurate, the Eagles’ second album was recorded, arranged, and orchestrated in London, topped off back in Hollywood with tintype photography and period clothing for the cover, and even a guns-blazing promotional video a decade before MTV that would have made Quentin Tarantino envious. So how did their handlers like what The Eagles had hatched on Desperado  ?

” (Co-managers) David Geffen and Elliot Roberts were really kind of against it, in a lot of ways”, admits original Eagles bass player/ singer/ songwriter Randy Meisner, “because they didn’t like it after we’d finished it. It wasn’t the kind of album you’d think we should have had for the second album. They thought it should be more down the line of the first album with more rock’n’roll songs, and it shouldn’t be a theme album. That it was chancey, that it was a big chance to take.” – Redbeard