Not since the Beatles had a band exited the international stage at the zenith of their popularity like The Police following 1983’s Synchronicity   album and eighteen month tour, so to say that Police singer/ songwriter Sting‘s first solo album, The Dream of the Blue Turtles,   was highly anticipated is quite an understatement. Musical direction-wise it surprised some who did not know Sting’s pre-punk jazz roots at college, but in no way did it disappoint, with “If You Love Somebody, Set Them Free“, “Russians“, and “Fortress Around Your Heart” framed by sophisticated arrangements showcasing the lilting soprano sax of Branford Marsalis. Sting is my guest here In the Studio  for The Dream of the Blue Turtles   on its thirty-fifth anniversary.

…Nothing Like the Sun   in 1987 continued that musical direction with “Be Still My Beating Heart”,”Englishman in New York”, and the #7 “We’ll Be Together” resulting in the album’s debut at #1 in the UK, a #9 peak in sales stateside, garnering three Grammy nominations including Album of the Year, and eventually selling an estimated eighteen million copies worldwide.

In this In The Studio  classic rock interview, Sting covers a lot of ground , including paying his dues pre-Police by playing in cabarets and backing stand-up comedians ; the pejorative term “Third World countries” and the conundrum of developing nations ; the alarming lack of heroes in our society today , and the failure of politicians to provide leadership ; ecology , global warming , and threat of pandemic disease ; how fatherhood changed his relationship with his own father ; losing both parents at the height of international stardom; his favorite pop songwriter ; the Nordic myth that inspired “The Soul Cages” ; and the satisfaction Sting derives from writing such timeless songs as “Roxanne”, “Message in a Bottle”,”Every Breath You Take”,”King of Pain”, “All This Time”,”If I Ever Lose My Faith in You”,”Fields of Gold”,” and “Brand New Day”.

“Basically, misinformation is the most frightening aspect about American culture. People only get the information that confirms their prejudices. The opposing viewpoint isn’t really easy to find.” Sting made that observation to Spin  writer Vic Garbarini, not echoing the conclusions of US intelligence agencies in the last four years, but rather presciently predicting it  in conjunction with Sting’s sophomore solo release ,…Nothing Like the Sun  in October 1987. –Redbeard 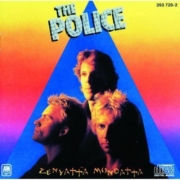