Emerson, Lake, and Palmer‘s third studio album, and fourth overall in barely two years,  was entitled Trilogy  coming in July 1972, a high watermark peak for Progressive Rock’s quality as well as massive popularity ( see sidebar link below ). “Lucky Man” from their debut Emerson, Lake, and Palmer may have remained their most famous song, and their fourth studio album Brain Salad Surgery may have been their best seller, but Trilogy has remained a favorite over these many changes in rock music as the place where Keith Emerson, Greg Lake, and Carl Palmer‘s ambitions to expand the palette of rock music were perfectly balanced by terrific songwriting and production on “The Endless Enigma“, “From the Beginning“, and the title song opus.

The late Greg Lake and sole survivor Carl Palmer continue this in-depth conversation with some hilarious stories, including how the late Keith Emerson accidentally invented the mosh pit! 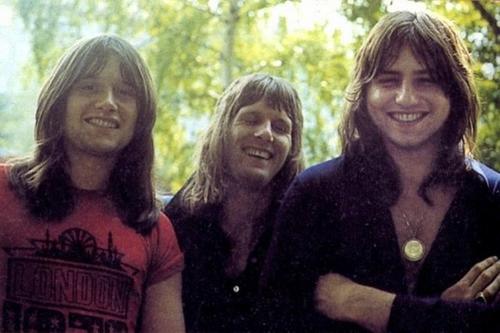 Keith Emerson died suddenly at age 71. Keith was a pioneer in progressive rock, and a true gentleman. I am truly saddened that he is gone. And few new at that time that Greg Lake was terminally ill, and Greg’s cherubic smile and choirboy voice was silenced about six months later leaving Carl Palmer to serve here as the legacy historian of  Emerson, Lake, and Palmer’s  Trilogy, which soared to the #5 seller in the US shortly after release in July 1972.- Redbeard

Echoes In the Studio- Voices of Fallen Rockers
advertisement