“Now, can you see those dark clouds gathering up ahead?
They’re gonna wash this planet clean like the Bible said
Now you can hold on steady, try to be ready
But everybody’s gonna get wet
Don’t think it won’t happen just because it hasn’t happened yet…”- “The Road and the Sky”

Late for the Sky   in September 1974 was when Jackson Browne first touched all the musical bases for me. Beginning with his 1972 debut, Jackson Browne won praise as a superb song craftsman and a meticulous record maker, placing no less than three of his earliest studio albums onto Rolling Stone magazine’s Top 500 Albums of All Time list, with The Pretender  clocking in at #391. But the predecessor Late for the Sky, Browne’s third album containing the dashboard confessional “Fountain of Sorrow“, the cautionary guitar rave up “The Road and the Sky“, and the hymn-like title song all pointed to Late for the Sky  less a transitional album and more like all the tumblers coming up cherries from the one-armed bandit of fame.

The critical rave reviews for Browne’s fourth effort, 1976’s The Pretender,  were still coming in for the acclaimed Southern California singer/ songwriter when Jackson found himself to be a new first-time dad, a suddenly single parent, and a widower from the suicide of his first wife, Phyllis.

This interview with Jackson Browne features highlights“Doctor My Eyes”,”Jamaica Say You Will”, and “Rock Me on the Water” from his 1972 debut; Late for the Sky‘s  title song as well as “Fountain of Sorrow” from 1974; his commercial breakthrough and multi-million seller The Pretender   in November 1976 with “Here Come Those Tears Again” and the timeless title song; and a 2010 live acoustic version of the 1977  Jackson Browne mega-hit “Running on Empty”. – Redbeard 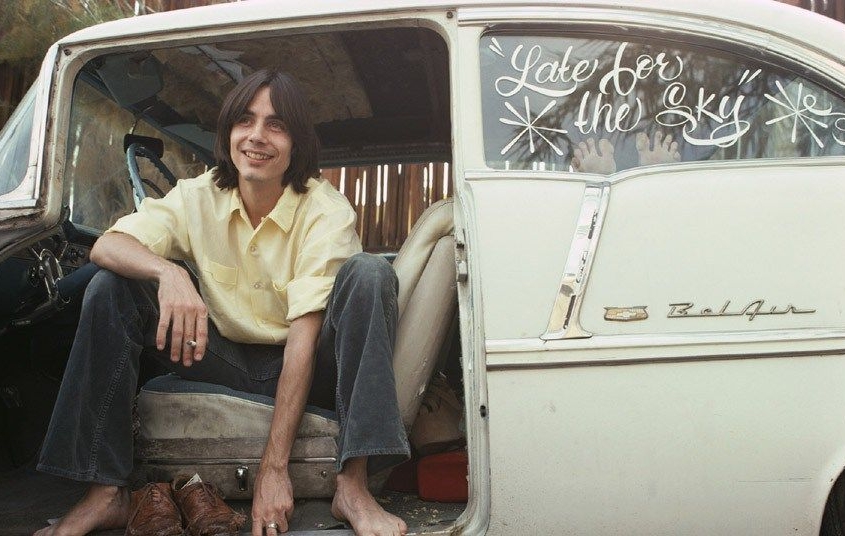