“We made our first video for the song ‘Don’t Tell Me You Love Me‘ for $10,000,” Night Ranger singer/songwriter/bass player Jack Blades confesses in this classic rock interview marking the 35th anniversary of the California band’s Dawn Patrol   debut album. Now to you and me, ten grand sounds like a lot of money, but in the MTV Eighties, entire albums were being recorded for less than $50K while a single song video price tag easily could top twice that much. In 1982-83 Night Ranger was the first American band to break out simultaneously on rock radio as well as the new 24 hour music video channel in America, and Blades, singing drummer Kelly Keagy, and lead guitar player Brad Gillis all from the band Rubicon meshed seamlessly with Montrose veteran keyboard player Alan Fitzgerald and guitarist Jeff Watson in the studio, on stage, and on screen.

Songs “Sing Me Away”, the anthem “You Can Still Rock in America“,”When You Close Your Eyes“,”Four in the Morning“, and the touching true story “Goodbye” are all chronicled here by Jack Blades. But it was the song “Sister Christian“, written by Keagy about his sister Christy, which Night Ranger demo’d but decided to leave off of their Dawn Patrol    debut, which could not be denied in 1984 on the follow up Midnight Madness,  becoming the high school prom/ graduation song that year for millions.- Redbeard 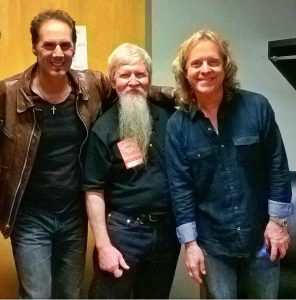