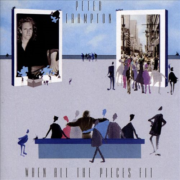 As Peter Frampton mounts his farewell tour of America, his long-ago adopted home, it also marks the thirtieth anniversary of one of the Eighties’ real under-rated gems, 1989’s When All the Pieces Fit . Frampton teamed up with some of that period’s most successful songwriters including Will Jennings (Steve Winwood), Danny Wilde of the Rembrandts, and B.A. Robertson (Mike and the Mechanics’ “The Living Years” ) to make ten songs which go to the top of my essential listening list, starting with “More Ways Than One”. But Peter’s health concern now  with a progressive degenerative muscular disease, which prompted the current farewell tour, is not his first crisis, as you will hear in this interview.

Everybody knows that young Englishman Peter Frampton revolutionized the recording industry in early 1976 with his live double set  Frampton Comes Alive.  But where did those now-iconic songs like “Show Me the Way”, “Lines on My Face”, “Baby I Love Your Way”, “All I Want to Be (Is By Your Side)”, and “Do You Feel Like We Do” originally come from? Peter joins me In the Studio to trace the days after he left Humble Pie, his struggles with four solid but woefully under-exposed solo studio albums, his phenomenal transformation into pop superstardom with the live album, and the tumultuous years immediately after trying to survive it all.  Peter Frampton had the Cinderella story of Comes Alive   two years earlier turn nightmarish by early July 1978. Personal and professional betrayal, infidelity, exhaustion…it all came crashing down literally, and it almost cost Frampton his life and his career. Peter tells the dramatic story here In the Studio. –Redbeard
July 15, 2019/by Red Beard
https://www.inthestudio.net/wp-content/uploads/2014/07/PETER-FRAMPTON-When-All-the-Pieces-Fit-untitled.png 500 500 Red Beard https://www.inthestudio.net/wp-content/uploads/2017/01/ITS-COLOR-white-studio.png Red Beard2019-07-15 08:10:232020-01-16 22:59:35Peter Frampton- When All the Pieces Fit 30th Anniversary