“They didn’t like me nose, me clothes, or me hair!” says Rod Stewart of his first record company audition in London, which makes a charming basis for the song “Can’t Stop Me Now” on our encore presentation of the 2013 album Time . Blame Buddy Holly, Bob Dylan, and the Beatles. Before them, Artist and Repertoire execs at a record company chose a songwriter’s tune, then matched it with a separate singer or vocal group in hopes of making a hit (sorry to break it to you, but Elvis did not write the songs. But I guess he did okay). It was John Lennon and Paul McCartney, inspired by Holly, that forever changed the rock music business to where a recording artist needed to be the total package for critical respect, career control and longevity, and monetary gain. And that has been the conventional wisdom in the music biz for half a century. So how then do we explain Rod Stewart? You see, in a fifty year career as one of the world’s biggest rock stars, the Rooster-Haired One could never be described as “prolific” in the songwriting department.

Case in point: Stewart’s last hit composition “Forever Young” was thirty years ago. At most he never wrote more than half of the songs on his biggest-selling albums, yet the songs which Rod Stewart did write are some of the most popular songs ever, including“Maggie May”,”Mandolin Wind”,”Hot Legs”,”You’re in My Heart”,”Every Picture Tells a Story”,”You Wear It Well”,”Tonight’s the Night”, and the aforementioned “Forever Young”.

While awaiting the return of his creative muse, Stewart had been anything but inactive nor unpopular, releasing no less than five hit albums in the preceding decade in his Great American Songbook series of 20th century standards, plus writing his best-selling autobiography Rod  in 2012. But it is Time,  his 2013 return to rocking and writing, that is our subject as Rod Stewart returns In the Studio. –Redbeard 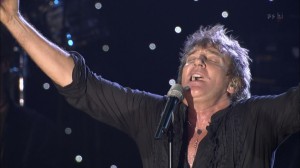