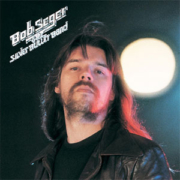 Bob Seger and the Silver Bullet Band’s Night Moves  in October 1976 was such a major album, not just for the “eight year overnight success” that the mainstream media discovered in the Detroit journeyman singer/ songwriter, either. Along with Steve Miller‘s Fly Like an Eagle , Hotel California  late that year from the Eagles, and Frampton Comes Alive  by Peter Frampton, Night Moves  and its songs “Rock and Roll Never Forgets”,”Main Street”,”The Fire Down Below”, “Come to Poppa”, and the timeless “Night Moves” vaulted FM rock radio over the AM dial Top 40 colossus that had totally dominated American listenership for a generation. Everybody’s all-American Bob Seger is my guest here In the Studio  for the forty-fifth anniversary of the all-important Night Moves  the week of October 4. –Redbeard