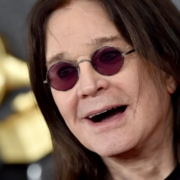 To get you primed for the fiftieth anniversary of Black Sabbath‘s Paranoid , here’s a live medley of “Iron Man” plus “Children of the Grave” performed in concert by Ozzy Osbourne April 28, 1982 at Memphis Mid-South Coliseum, one of the first shows after the accidental death of Ozzy’s guitarist Randy Rhoads in a single-engine plane crash. Subbing last minute for Rhoads, Brad Gillis on guitar shows grace under pressure along with band members Rudy Sarzo, Don Airey, and Tommy Aldridge as this performance was broadcast nationwide. So this is absolutely live, no overdubs. – Redbeard