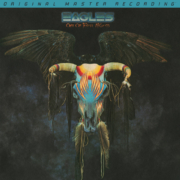 Driving halfway across America  not long after the June 1975 release of One of These Nights  by The Eagles is when I truly realized just how massively popular this band had become. This was long before 21st century satellite radio, so driving 1400 miles from Lincoln NE to Hartford CT meant re-tuning the car radio about every seventy-five miles or so to a new local station. And every one, whether AM or FM, big city signal or small, were playing “One of These Nights”,”Lyin’ Eyes”, and “Take It to the Limit” as if their FCC licenses depended on it.

All three of those hits from the album One of These Nights  went Top10, with the album topping the Billboard sales chart  and “Lyin’ Eyes” winning a Grammy. Original Eagles singer/ bass player Randy Meisner and the late Eagles co-founder singer/ guitarist Glenn Frey joined me here In the Studio, in a classic rock interview that is precious now with Frey’s too-soon passing, about the album which single-handedly took country and western music from the bunkhouse to Broadway, permanently jettisoning the qualifier “and  western” in the process by taking the longhorns off of Hank Williams’ Cadillac. –Redbeard
https://www.inthestudio.net/wp-content/uploads/2020/05/Eagles_OneofTheseNights_1__69346-e1662511048622.jpg 640 640 Red Beard https://www.inthestudio.net/wp-content/uploads/2017/01/ITS-COLOR-white-studio.png Red Beard2020-05-31 19:31:262022-09-06 19:44:15Eagles- One of These Nights- Randy Meisner, the late Glenn Frey