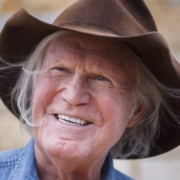 The time back in Spring 2007 when noted Texas songwriter Billy Joe Shaver sang “Georgia on a Fast Train” and “Live Forever” and told me stories on my afternoon Dallas/ Ft.Worth radio show, it wasn’t so much an interview as a case of squatter’s rights,  as it turns out much like the way in which he introduced himself to the late great Waylon Jennings, who would cover many of Billy Joe’s songs while defining the sound of Outlaw Country on such seminal albums as Honky Tonk Heroes  and This Time  in 1973.

Shortly after singing these songs for us, Billy Joe Shaver placed the song which now serves as his epitaph. “Live Forever” appeared in the Academy Award-winning 2010 film Crazy Heart  with Jeff Bridges, Maggie Gyllenhaal, and co-writer Robert Duvall: