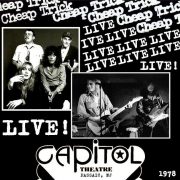 Cheap Trick actually delayed their studio follow-up to the brilliant 1978 third album Heaven Tonight , not because of a lack of strong songs  written, but because their fluke live in-Japan- only release At Budokan  virtually blew up over the Winter 1979. Here’s proof: just before Christmas 1978 Cheap Trick performed the hypnotic “Need Your Love” in concert, a song which would not see release for nine months until the Dream Police  album. –Redbeard