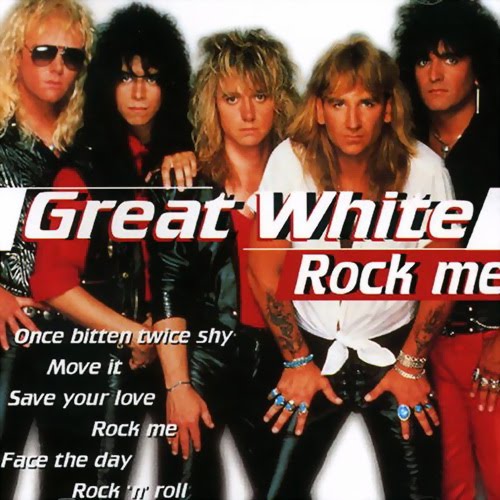 We received a nice note a few years back  from Bobby Black at an In the Studio  affiliate  who had dinner with Great White keyboard player/producer Michael Lardie. It seems that Lardie was reminiscing appreciatively about the positive impact that the support of my North Texas radio station KTXQ-Q102 had on Great White’s career at a crucial point mid-’80s when the hard rock land sharks were trying to expand  from being the unofficial house band of KNAC in Long Beach, CA.

These were the carefree days before Great White would forever be connected to rock’s greatest tragedy ever, the February 2003 “The Station” club fire in West Warwick RI. According to the Boston Globe (2/2/08), nearly a dozen individuals, club owners, manufacturers, local and state governments, as well as Great White, were found to be directly or indirectly liable for the 100 deaths. But the cruelest irony of all had to be the out-of-court settlement of $30 million from the claim against Providence television station WPRI-TV that their video crew obstructed the patrons’ escape while not helping fans to flee the inferno. How, you may wonder, did a tv crew know in advance to be on hand to film the horror from the moment the pyro stage flashpot ignited?

They were there filming “B roll” for a story on nightclub tragedies. – Redbeard