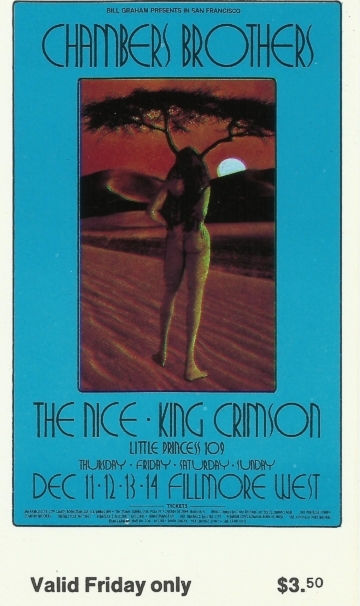 By looking at this San Francisco Fillmore West poster, clearly King Crimson were third billed openers that night of December 14, 1969 ahead of fellow countrymen from London, The Nice, and headliners local Bay Area favorites The Chambers Brothers (“Time Has Come Today” ). But now we know all manner of rock history was being hatched both on and behind the Fillmore West stage that fateful night.

The Nice were led by a highly-touted keyboard player named Keith Emerson who had struck up a budding friendship with the baby-faced lead singer and bass player for King Crimson, Greg Lake, as the two bands shared dressing rooms as they crossed America for the first times. The seeds were sewn that night at the Fillmore West for what would become Progressive Rock’s first supergroup a year later with Emerson, Lake, and Palmer. What no one realized was that this performance would be the last ever by the original King Crimson line-up of Robert Fripp, Ian McDonald, Michael Giles, and Greg Lake. –Redbeard
https://www.inthestudio.net/wp-content/uploads/2020/12/KING-CRIMSON-Epitaph-91OPo9HUnDL._SS500_.jpg 500 500 Red Beard https://www.inthestudio.net/wp-content/uploads/2017/01/ITS-COLOR-white-studio.png Red Beard2020-12-13 12:08:292020-12-20 19:17:43King Crimson- Epitaph- San Francisco 12/14/69 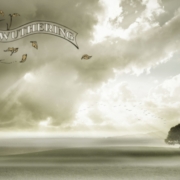 Genesis- A Trick of the Tail- Phil Collins, Mike Rutherford