Proving to the whole world that day to be anything other than “Helpless“, Neil Young and a cast of a hundred thousand in Philadelphia’s JFK Stadium joined a similar group in London’s Wembley Stadium via satellite, and an estimated 1.4 billion viewing and listening worldwide, to raise money and awareness for starving residents of Ethiopia, Sudan, and sub-Saharan Africa on July 13, 1985 for Live Aid .

I was on that Live Aid stage at JFK Stadium in Philly from noon until 7pm, then backstage until the stands emptied after midnight, and in my fifty year career I’ve never seen more people in an enclosed space (including at least ten Texxas Jams ). The view of the crowd of 90,000 from the Live Aid stage was breathtaking: sheer walls of people rising up  to the sky on either side of the performers, and in front a teeming sea of brightly colored humanity extending into the distance, where the line of the horizon was actually alive, populated against a cloudless blue sky. When a band would be introduced, from local heroes The Hooters to Tom Petty and the Heartbreakers, Bryan Adams, Eric Clapton, Led Zeppelin, Phil Collins, Mick Jagger and Tina Turner, the roar of energy that came from that crowd, sensing throughout the day that something extraordinary was happening and they were at one of two dual epicenters, was like a human tsunami that startled even the most seasoned veteran rockers. 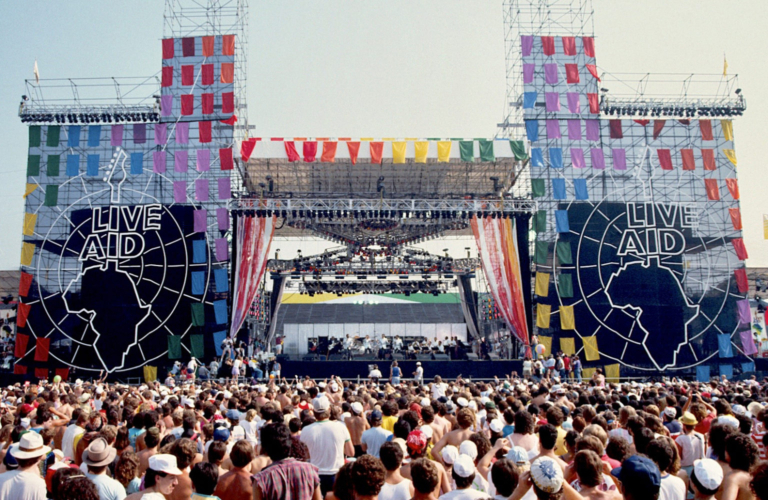 Some of the most significant facts that risk getting lost in the retelling here thirty-five years later are how the Live Aid  dual benefit concerts and simulcast, by far the most ambitious undertaking ever imagined in music entertainment  history on the scale of a one-day Olympics, had come together. But unlike the four years that each Olympics has to prepare, with a tried and true template established for decades, Live Aid was conceived and executed by Boomtown Rats bandleader/ activist Bob Geldof, the late concert promoter Bill Graham, and English promoter Harvey Goldsmith  in only four MONTHS. Another thing that is hard to realize is that about 100,000 of us who at the Philadelphia Live Aid concert completely missed Queen‘s historic show-stopping performance at the London Wembley Stadium that day, and for years we had to rely on word-of-mouth reports as the legend built, because so little of the concert video footage was available until recently. –Redbeard
https://www.inthestudio.net/wp-content/uploads/2020/07/LIVE-AID-reset-1536-999-e1594688748235.jpg 500 768 Red Beard https://www.inthestudio.net/wp-content/uploads/2017/01/ITS-COLOR-white-studio.png Red Beard2020-07-13 19:36:142020-07-26 16:06:37Live Aid 35th Anniversary- Neil Young- Helpless- Philadelphia