To truly comprehend just how massively popular this album was, it helps if you actually write it out numerically: 12,000,000 copies of Van Halen‘s sixth album, 1984 , were sold in the U.S. alone in the three decades since it was released. Propelled by Van Halen’s very first #1 hit “Jump”, three million of those were sold in America in the first ninety days! Already America’s most popular hard rock band prior to its release, 1984    propelled the Pasadena quartet of innovative guitar whiz Eddie Van Halen, drummer brother Alex, bass player and unmistakable harmony singer Michael Anthony, and showman extraordinaire David Lee Roth into the stratosphere of rock’s elite with additional songs “Panama”, “I’ll Wait”, “Drop Dead Legs”,” Top Jimmy”, and the video which made even MTV blush, “Hot for Teacher”.

But as any high-flying throttle jockey can attest, the view from the top is exhilarating, but the dizzying height is disorienting and there’s no air up there to breathe. Like water on pavement, celebrity seeks out every crack and crevice in a relationship, and when relations turn chilly, the cracks can quickly expand into chasms. The 1984  album and subsequent sold-out tour closed that chapter on the original band, with the Van Halen story becoming a never-ending soap opera that has been constantly controversial ever since.

While the facts contained in this interview remain true and accurate over time, the opinions expressed here by Eddie, Alex, and Michael clearly are a snapshot of just one of the many chapters in this saga, at a time before David Lee Roth was invited back into Van Halen, as well as before Michael Anthony was dismissed, and Eddie Van Halen would perish from throat cancer.- Redbeard 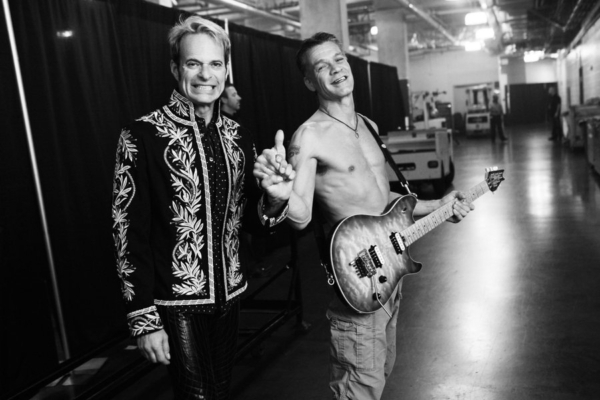 Queen- A Night at the Opera 45th- Brian May, Roger Taylor