Sitting in the East Texas barbecue roadhouse Stanley’s in Tyler recently with a couple of veteran radio buddies, I noticed their upcoming schedule of musical guests, including the talented Ian Moore. But the brief description of the rhythm and bluesy singer/songwriter/guitarist claimed that he was”from Seattle”. It was everything I could do to resist hurling a stuffed jalapeño at the sign! Former Texas governor Rick Perry would have threatened to secede from the Union for less. Just as his 1993 eponymous debut was being released, then a very young Austin newbie with an old soul, Ian Moore visited Q102 Dallas and serenaded us one morning after an all-nighter with Austin’s finest. Here’s Ian with absolutely no studio embellishments, singing and playing directly into the radio console, performing the King Curtis R&B classic “Just a Little Bit”. –Redbeard 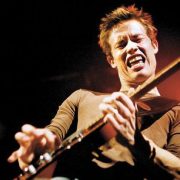