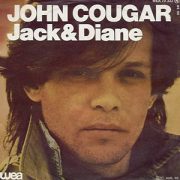 Just a few days prior to Christmas 1991 , John Mellencamp was rehearsing his band in his garage in the snow-covered hills of Central Indiana in preparation for their upcoming 1992 tour. I was invited to interview him and record the band in rehearsal in John’s garage, thus this performance of  “Jack and Diane” is absolutely live,  no overdubs. In memory of accordion/keyboard player John Cascella .-Redbeard

John Mellencamp- Get a Leg Up- garage 12-91
advertisement