To me it has always been inconceivable that the same producer who recorded the claustrophobically dry close-miked sparse arrangements on David Bowie’s The Rise and Fall of Ziggy Stardust and the Spiders From Mars ,  an album which sounded unlike any before it in 1972 and precious few since, could two years later also produce Supertramp’s cinematic wide wet Crime of the Century.  Ken Scott’s impressive credits as one of only five ever to record the Beatles, on through six Bowie albums including Ziggy Stardust, Supertramp’s breakthrough Crime… , to jazz rock fusion pioneers Mahavishnu Orchestra, Billy Cobham’s Spectrum,   and Stanley Clarke, have made Scott the “Stanley Kubrick of rock.

So it was only fitting that producer Ken Scott  used the occasion of the 40th anniversary of Bowie’s glam rock game changer to launch Scott’s memoirs, Abbey Road to Ziggy Stardust.   As you will hear in this classic rock interview  with Bowie and the late guitarist/arranger Mick Ronson, the irony in the David Bowie back story is that Ronno points out that the Ziggy Stardust album and U.S. tour in Summer 1972 did not sell very well, at least not initially, which Ken Scott confirms in his book. ”While many of the initial dates were indeed successful, Bowie mania had not taken hold in all parts of the country, as dates n Houston and Oklahoma City were cancelled due to lack of ticket sales and a concert in St.Louis had attendance so small (only 180 in an 11,000-seat hall) that David gave what amounted to a private show, but as the tour progressed so did the buzz. By the second time back in cities such as Philadelphia and Cleveland, he (Bowie) was selling out 10,000-seat venues,” Scott writes. 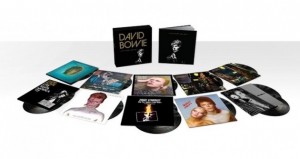 Since then Rolling Stone magazine writers have ranked Ziggy Stardust    at #35 on their Top 500 Albums of All Time  ahead of Hotel California,   debuts from the Doors and Sex Pistols, Dark Side of the Moon ,  Bridge Over Troubled Water,   and Meet the Beatles/Please Please Me,   changing the trajectory of rock music, fashion, and gender social issues in just 38 minutes. – Redbeard