Down through the history of mankind, first flights such as The Eagles are revered: the Montgolfier brothers in Paris in 1783 with their hot air balloon; the Wright brothers in 1903 with powered flight; Charles Lindbergh’s first transatlantic flight; Yuri Gagarin first into space in 1961, Alan Shepard first American to do so, and Apollo 11’s Neil Armstrong, Buzz Aldrin, first to land on the Moon and return with Michael Collins in July 1969; and on Earth, Dick Rutan and Jeana Yeager flew around the world in 1986 without ever landing! In June 1972, when the debut album by a Southern California-based band The Eagles was quietly released, it had none of the anticipated date-with-destiny public spectacle shared by all of the aforementioned events. But history proved that the original quartet’s first flight would quickly allow a career to take wing that would soon soar, resulting in The Eagles becoming the most popular American band ever.

By June 1972 America’s musical continental drift had shifted dramatically westward, in part a reaction to the psychedelic sounds of the Summer of Love five years earlier. Bob Dylan had put upstate New York’s Woodstock into his rear view mirror, headed for Nashville’s skyline, while The Band likewise bailed for Malibu California a continent away. David Crosby, Stephen Stills, and Graham Nash had left their respective internationally established bands to convene in Los Angeles’ Topanga Canyon where The Byrds already had flocked around newcomer Gram Parsons. Dylan’s “Lay Lady Lay”,”Teach Your Children” by Crosby, Stills, Nash, and Neil Young, and John Sebastian’s Lovin’ Spoonful hit “Nashville Cats” all had snuck pedal steel guitar onto U.S. Top 40 radio, but these were anomalies rather than a trend, as AM pop stations were peppering in more rock singles in response to new competition from FM progressive rock stations in 1972.

Despite those few exceptions, it is impossible to overstate just how rigidly segregated musically the pop and country music establishments were when the first Eagles album was released in June 1972. The Roy Acuff-era Nashville-centric radio format, officially known then as Country & Western, was so autocratic that they considered Buck Owens’ Bakersfield recordings almost heretical. And Willie and Waylon who? Thus in Summer 1972 the rock media viewed the “country rock” hybrid as an orphan, while Nashville’s all-powerful Music Row mafia rejected the bastard spawn as patently illegitimate. 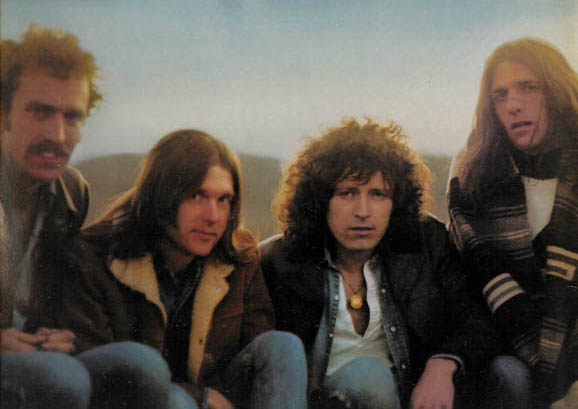 It was into this musical migration westward that rode two independent, unheralded, and very young musicians, Don Henley ( 2nd from right) from Northeast Texas and Glenn Frey ( far right) from Detroit Michigan, who would meet at country rock’s nexus in Southern California where they would recruit country rock pioneers Bernie Leadon(far left) from the Flying Burrito Brothers and Randy Meisner  ( 2nd from left) of Poco. Frey, who spoke to us before his shocking passing in January 2016,  and Meisner join me in this classic rock interview recalling the Eagles’ debut, impressively containing two Top 10 hits “Take It Easy” and “Peaceful Easy Feeling”, plus the Top 20 ” Witchy Woman”. – Redbeard