It is the fortieth anniversary of Blackout, the March 1982 big breakthrough in the US for the irrepressible Scorpions. Over the decades  I’ve had countless famous musicians claim that rock & roll had become their life, but only two, John Kay of Steppenwolf and the members of The Scorpions, knew that expressing the freedom inherent in playing rock music could literally cost  them their lives. While Kay was smuggled out of Communist East Germany at the age of six, The Scorpions all grew up in West Germany in the ominous shadow of the Soviet Union and its totalitarian satellites. In these Eastern Bloc countries, rock & roll was as synonymous with American and British Western ideals as Old Glory and the Union Jack.

For the last sixty years rock & roll could be the ticket out of socio-economic prisons of poverty and racial bigotry in North America, UK, and Australia, providing an express elevator to the penthouse of fame and fortune … if you were lucky. But for the Scorpions, simply listening to rock music beaming out of the pirate radio stations in the North Sea, or buying a Beatles record on the black market for an entire month’s wages, or wearing long hair and blue jeans, or attending an underground rave…any of these could get them surveilled, detained, interrogated, or worse. Much worse. The East German Stasi secret police didn’t rock, but heads did roll. 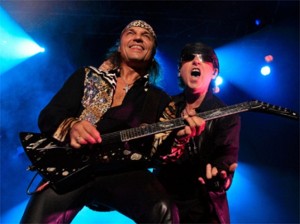 While we watched the televised reports of the fall of the Berlin Wall and the dissolution of the Soviet Union and Eastern Bloc states in December 1989, the Scorpions and my guests Klaus Meine and Rudolph Schenker were actually there, experiencing it firsthand in real time. With enough nuclear weaponry to annihilate every man, woman, and child on the face of the Earth 26 times over, the largest peaceful revolution in history happened, not with guns but with guitars.(Matthias Jabs left, Klaus Meine) –Redbeard