Back in 2020 when I heard that Spotify was introducing podcasts by co-producing one based on the premise that the CIA wrote the Scorpions 1991 international hit “Wind of Change”, I literally giggled out loud. “What a hoot!” I thought. “They’ll have to get the song’s composer, Scorpions lead singer Klaus Meine, to tell The New Yorker reporter Patrick Raddan Keefe the same story Klaus told me over twenty years ago about being invited to meet and dine with Soviet Premiere Mikhail Gorbachev in Summer 1990 when Scorpions played the Moscow Music and Peace Festival, which inspired Meine to write “Wind of Change” for the next Scorpions album, Crazy World. ”

But when I realized that podcast host Keefe was taking this CIA premise seriously by expanding it to a series of eight episodes and talking to everybody except  Meine or the Scorpions, my bemusement quickly turned to annoyance.


“Sometimes I felt like a tinfoil hat-wearing conspiracy theorist,” (quote) Keefe told Rolling Stone  magazine. Well, as the late poet/ activist Maya Angelou once said, “When people tell you who they are, BELIEVE THEM.”

Sitting with my guests Klaus Meine and Rudolph Schenker, guitarist/ songwriter,  it was fascinating to be reminded by members of Germany’s  beloved band just how much rock music  had changed this Crazy World by that album’s release. And they should know better than anyone: they were there, living it every day in just the six short years after the  1984 release of Love at First Sting  leading up to 1990’s Crazy World. “We were not proud of our country, and our parents were not proud of our country,” says Scorpions lead singer Klaus Meine. “They had just survived the (Second World) War. So rock music is the way we got out. And starting as young musicians playing English and American music, it was in a way something like an attempt to be part of the world community, to escape a place where you feel this burden.” 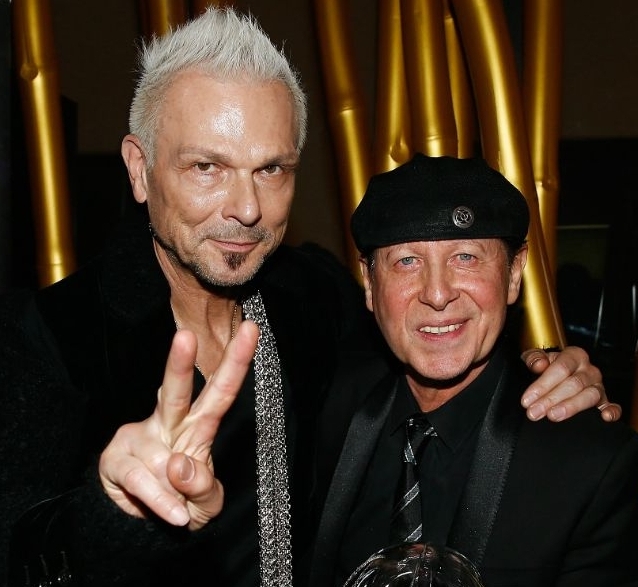 The Scorpions from Hanover Germany had been the decade-long international long shot when their 1982 album Blackout  blew up Top 10 in the US, powered by the # 1 Rock radio track “No One Like You”. The Scorpions’ follow-up album Love At First Sting  two years later soared to # 6 on the Billboard album chart with triple platinum sales while delivering a blitzkreig of rock anthems including “Rock You Like A Hurricane”, “Big City Nights”, and the signature power ballad “Still Loving You”.

But the real story is how the Scorpions overcame potentially insurmountable barriers of distance, language, lack of management, lead singer Klaus Meine’s desperate throat surgery, the notorious East German Stasi secret police, and the Berlin Wall to be key players with Soviet Premiere Mikhail Gorbachev’s dismantling of Communism in the Soviet Eastern Bloc. Lead singer/ songwriter Klaus Meine and guitarist/songwriter Rudolph Schenker share how rock’n’roll helped the Scorpions escape the uber guilt of Germany’s Nazi past and build a future.”We played Leningrad and the Moscow Music Peace Festival in 1988 and 1989, one hundred thousand Russians for each of two days in Lenin Stadium…When we were growing up in Germany, the Russians were the ‘bad guys’. But in 1989 there was such a feeling of hope…We told the Russians, ‘Our parents came with tanks. We come with guitars.”

So were people from outside the Scorpions brought in to work on 1990’s Crazy World ? Absolutely, but the last I checked, veteran song doctor Jim Vallance and producer Keith Olsen were never with the CIA. The song “Wind of Change”, which went to #1 in Germany, Sweden, Austria, Switzerland, France, Norway, Holland, #2 in the UK and Belgium, and #4 US, was captured perfectly in the zeitgeist of the time by Scorpions lead singer Klaus Meine. –Redbeard 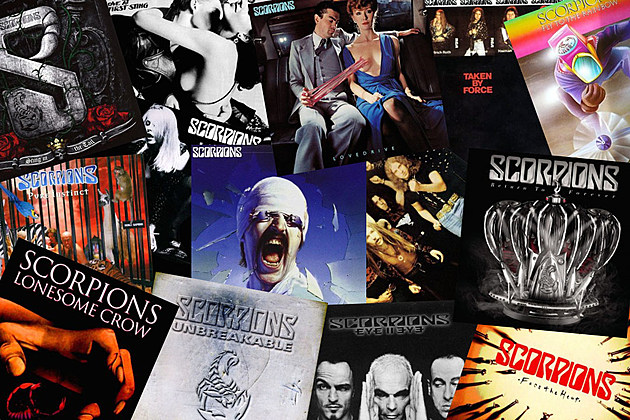