Tag Archive for: “Everything I Do I Do It for You” 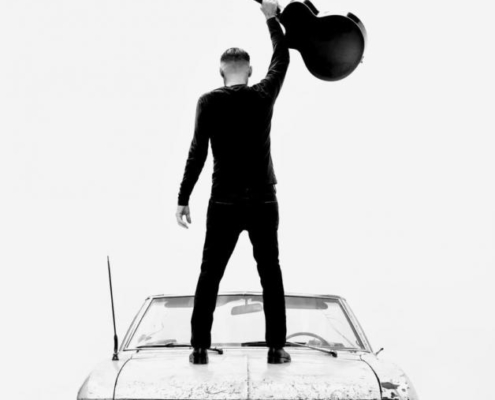 "So Happy It Hurts" is the Canadian rocker's fifteenth (!) studio album, and he's not even old enough to get the Early Bird Special down at Denny's. Adams became a star way back in late 1984 with "Reckless", one of the Eighties' biggest sellers, then in 1991 absolutely crushed it with "Waking Up the Neighbours", an all-time biggest selling album in history. Bryan Adams' seventh studio album, "18 'Til I Die" , was a #1 seller in the UK and Top Five sales internationally. But when  "18 'Til I Die" came out in June 1996, US rock radio programmers decided, in spite of the music actually on the album to the contrary, to brand Bryan Adams a love song balladeer, not rock enough, not alternative enough, not cool enough. Adams finally addresses the issue with tongue firmly in cheek on the song "Kick Ass" from "So Happy It Hurts" with the help of the brilliant British pillar of Python humor, John Cleese, who has been skewering pompous pundits for half a century. Also listen to the infectious "Never Gonna Rain Again" which could be Bryan Adams' next big hit.
https://www.inthestudio.net/wp-content/uploads/2022/03/Bryan-Adams-So-Happy-It-Hurts-1024x1024-1.jpg 628 628 Red Beard https://www.inthestudio.net/wp-content/uploads/2017/01/ITS-COLOR-white-studio.png Red Beard2022-03-20 17:35:542022-04-17 20:10:04Bryan Adams- So Far So Good/ So Happy It Hurts
advertisement