In producer Glyn Johns wonderfully behind-the-scenes memoir Sound Man ,  he tells how he suggested to the Rolling Stones during preliminary sessions for Back and Blue   that they all go to see Americans Little Feat in a theater concert in order to jump-start the venerable British band. Johns remembers it as one of the best shows he ever witnessed by anybody, with the Dixie Chicken   line up of the late Lowell George, Bill Payne, Paul Barrere (d. Oct 2019), the late Richie Hayward, Kenny Gradney and Sam Clayton. Some ten years later Doug Hall and I recorded Little Feat in front of 10,000 appreciative fans in Dallas, with the band still laying it down thick. –Redbeard 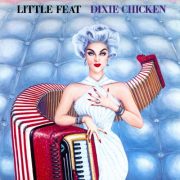 Little Feat- On Your Way Down- 1974
advertisement