For over twenty years, my Dallas/Ft.Worth radio station Q102 conducted what grew to become the largest annual radio blood drive in America, thanks to the incredible humanity of our loyal listeners and the free concerts we awarded them with such stars as the late Stevie Ray Vaughan & Double Trouble, the Fabulous Thunderbirds, Bonnie Raitt, the Allman Brothers Band, Cheap Trick, Eric Johnson, and Little Feat, who played a hot show to over 10,000 blood donors at the Dallas Convention Center Arena in November 1988. Live mix on the medley “Spanish Moon” into “Skin It Back” straight to broadcast by Doug Hall in the Crossroads Audio bus, no overdubs; event executive producer the lovely Andy Lockridge, post production by Redbeard. 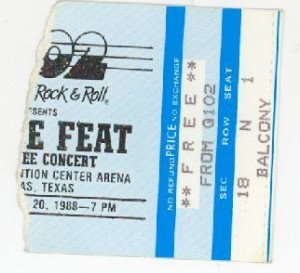