“There’s a history of people from rock’n’roll going to Hollywood and never coming back,” U2 guitarist/ songwriter The Edge reminds me in this classic rock interview regarding the controversial loud love letter to America, Rattle and Hum. Maybe one of the reasons why U2’s Rattle and Hum  film and soundtrack album did not get quite the same critical worship that their preceding album The Joshua Tree   had received is because all five U2 studio efforts to date had been conceived with the band’s uniquely Irish perspective. Rattle and Hum  saw the gauzy media perceptions of American culture by my guests Bono, The Edge, Adam Clayton, and Larry Mullen jr jammed up against a Reagan-era reality that did not always ring true, confirmed in the songs “Desire”, “Angel of Harlem”, “When Love Comes to Town” with the immortal B.B. King, “Silver and Gold“, the John Lennon-inspired “God pt II”, as well as live versions of Joshua Tree favorites.

When Academy Award-winning documentary film maker Davis Guggenheim‘s ( An Inconvenient Truth , and my favorite It Might Get Loud with guitarists The Edge, Jack White, and Jimmy Page) U2 rock doc From the Sky Down aired on Showtime, you saw confirmed what U2 drummer Larry Mullen jr blurted out to me during in our In The Studio classic rock interview: that the Dublin-based quartet nearly broke up in the Berlin recording studio after reconvening following their Rattle and Hum  first flirtation with the movie world.

“We’ll always be that band that over-reaches, and we’ll take the hit for it”, declares lead singer/ lyricist Bono in this week’s classic rock interview.”It doesn’t matter. We want it to count, to make a difference. In the ’80s there were more determinable bad guys, and we were having a go at them. In the ’90s our music got a little more intimate, and the hypocrisy that we were having a go at was more our own. I’d like to think that it’s the same righteous anger.” 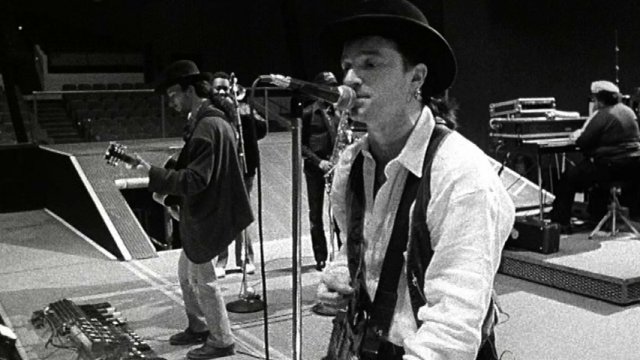 “The Last Rock Stars!”, Elvis Costello proclaimed when introducing U2’s Bono and The Edge on Costello’s Spectacle tv interview series a few years ago, and while no one could have predicted it when U2’s documentary concert film and soundtrack album Rattle and Hum debuted in October 1988, it is clear now that the post- Joshua Tree period captured in the film, as well as in this week’s In the Studio interview, is precisely when the band was elevated into rock’s pantheon. But unlike the unseen and unheard passage of the Voyager 1 spacecraft from our solar system into uncharted interstellar deep space, U2’s reviews while crossing over rock’s “termination shock boundary” to superstardom were very public, plentiful, and contentious. Four lads from Dublin starting a fight? Unheard of ! –Redbeard