Truly one of the greatest honors I have ever received was to have James Taylor sing a song to me and my live radio audience. Like millions of others, I came of age at the time that James debuted on U.S. radio with the stunning “Fire and Rain” in 1970, but this gem “Something in the Way She Moves” from the earliest JT canon actually pre-dates his breakthrough by about 18 months. Originally from Massachusetts, transplanted as a boy to Chapel Hill N.C., Taylor was the first musician signed to the Beatles’ Apple label. Peter Asher, half of the ’60s duo Peter and Gordon, signed Taylor to Apple after Asher (his sister Jane was Paul McCartney’s girlfriend) parlayed the connection into a job as head of A & R at the label. Peter Asher would later manage Taylor’s career and produce several of JT’s biggest sellers, including the December 1968 James Taylor  album on which “Something in the Way She Moves” originally appeared. 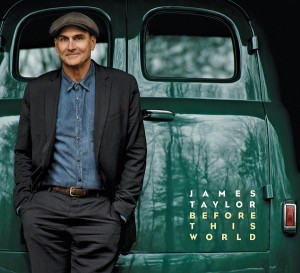 As for the title lyric of this song being exactly the same as George Harrison’s legendary Beatles contribution released on Apple Records 10 months after Taylor’s, let’s just say that James deferred to his Beatle boss’ pre-eminence at the time and wisely chose not to press the matter. That would have to wait a few years before Harrison would be sued ( and lose) for doing the same thing to the composer of The Chiffons’ “He’ So Fine” when writing “My Sweet Lord”.

By the way, I have been sending James Taylor’s album Before This World  to anyone who laments today’s music with the complaint that “no one makes good albums anymore where every song is good…”. Hands down JT’s album was my choice to beat for Grammy Album of the Year in 2015.  -Redbeard