“I controlled the level of the PA from an amplifier that sat in front of the bass drum,” Robert Plant mused to me about Led Zeppelin’s first public performance November 9, 1968 at The Roundhouse at Chalk Farm. On  Rolling Stone‘s  Top 500 Albums of All Time list, magazine writers, contributors, and hundreds of recording artists ranked Led Zeppelin‘s January 1969 debut at #29. The UK magazine Uncut‘s list of the “100 Greatest Debut Albums placed it at no less than #7, but when the Q glossy compiled “The 21 Albums That Changed Music”, Led Zeppelin 1    clocked in at a breathtaking #6 on that uber-elite accounting. “Heavy metal still lives in its shadow”,  Rolling Stone reminds us. Not bad for a fifty-plus  old pensioner.


This remarkable first effort from young but experienced in-demand London session players Jimmy Page of the Yardbirds and John Paul Jones, plus unknowns Robert Plant and John Bonham, redefined the limits of rock music while magnifying its visceral power, its reckless abandon, and yes, some of its faults. Case in point: Led Zeppelin 1 received a surprising number of negative critical reviews from leading rock writers at Melody Maker, the Village Voice, and the aforementioned upstart Rolling Stone, whose heavy metal harangue blathered on whether white Anglo boys could play black American blues without exploiting  the originators, a specious argument since the white music critics didn’t see the hypocrisy in them writing about African-American blues musicians for money while co-opting every lyric phrase and song title ( “Rolling Stone” is a Muddy Waters song, for Pete’s sake). The manufactured debate eventually was squashed by Led Zeppelin’s sheer worldwide popularity. 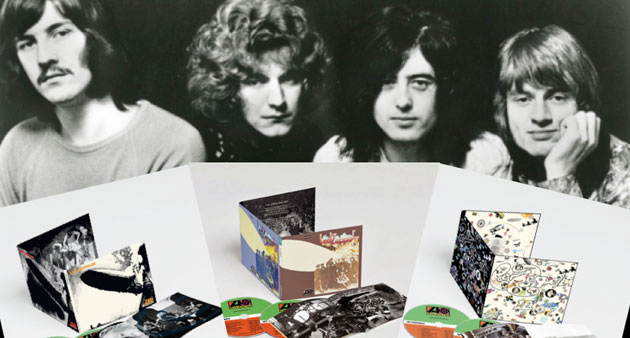 John Paul Jones, Jimmy Page, and Robert Plant were  awarded America’s highest cultural award by President Barack Obama before the 2013 Kennedy Center Honors gala for , among others, the songs on the January 1969 debut such as “Good Times, Bad Times”,”Babe I’m Gonna Leave You”,”Dazed and Confused”,”Communication Breakdown”, and Willie Dixon‘s “I Can’t Quit You”, while Page has released  deluxe editions of the first three Led Zeppelin albums with alternate mixes, previously unreleased live performances, and remastered sound. Page and Plant are my guests In the Studio for this  classic rock interview.- Redbeard 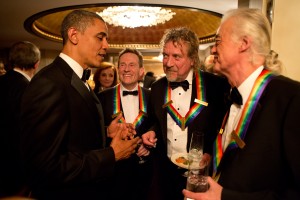