It was mid-November 1974 when progressive rock band Genesis let livestock loose on The Great White Way with the ambitious The Lamb Lies Down on Broadway . There are several revelations in this Genesis classic rock interview  with band members Phil Collins and Mike Rutherford specifically about the initial five Genesis studio albums including  1972′ s Foxtrot,   Selling England by the Pound    the following year, and the dense, conceptual  The Lamb Lies Down on Broadway  ,  all at a time when the charismatic Peter Gabriel was fronting the English progressive rock quintet.

Rutherford confesses that the first Genesis personnel departure, that of his Charter House prep school chum guitarist Anthony “Ant” Phillips, was actually the hardest of all of the  subsequent defections which would later occur in the band’s  fifty year run. Still, Phil Collins grudgingly admits to being somewhat annoyed at  having to defend even now the wisdom in the Genesis evolution of a band whose members have sold collectively upwards of 130 million records and still stayed together longer than  most of their peers. 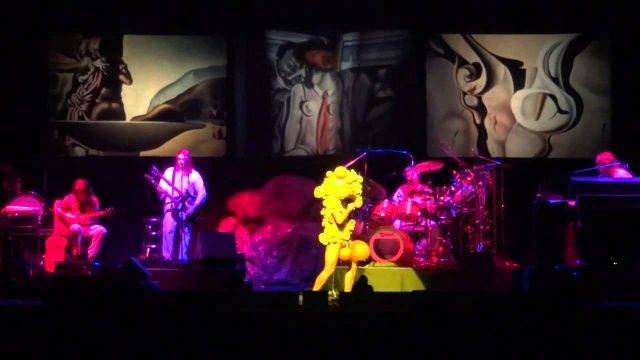 ( Left to right  Steve Hackett seated, Mike Rutherford, Peter Gabriel in yellow costume, Phil Collins behind the drums, Tony Banks behind keyboard) As the lead singer, Peter Gabriel was employing performance art in Genesis concerts long before anyone had even coined the term. But when asked if everyone else in the band encouraged the riveting, bizarre costumes worn by Peter, Mike Rutherford admitted, “Had Peter run it by us, we probably would have said ‘No.’ Peter had the brains to actually realize, ‘Don’t tell them what I’m doing, just DO it.’ And it worked that way, otherwise we would have vetoed most of his things, knowing us!”

Phil and Mike chronicle the first distinct era of Genesis 1970-75 in part one of our look into the Genesis R-Kive   three-disc anthology companion to the BBC/ Showtime documentary Genesis: Sum of the Parts.  And be sure to listen to part two here. -Redbeard