For the  story of INXS’ breakthrough album Listen Like Thieves  in 1985 ( Billboard sales peak at #11), I stumbled upon my 1988 interview with the late lead singer for INXS, Michael Hutchence, in which he matter-of-factly admitted to me that INXS was his first and only band!

When we Americans first heard INXS sing “The One Thing” and “Don’t Change” in late 1982, Tyranosaurus Rock that had roamed and roared in stadiums and arenas throughout the Seventies was about to stumble. Led Zeppelin was gone. The Rolling Stones, The Who, Eric Clapton, and Pink Floyd self-consciously all were making forgettable albums around 1982 after the Punk Rockers had rattled their dinosaur cages. Then the Punks’ promise was never kept and they self-destructed. By 1982, progressive rockers YES and Emerson, Lake, and Palmer were as equally anachronistic for the MTV Eighties as the Grateful Dead and the Allman Brothers Band. Lynyrd Skynyrd had fallen from the sky five years earlier and Southern Rock was running out of ammunition for its 38 Specials. America’s premiere hard rock band, Aerosmith, appeared to be on a permanent vacation by 1982, and the cinderella band Boston, with only two albums, had more court dates than concert dates back then. Journey, Styx, and REO Speedwagon, emphasizing the “pop” side in rock popularity, would never gain critical acclaim or equal their respective previous sales peaks again. So where else but the historical music business meccas of London, New York City, or Los Angeles could we expect to find music that was tight and right for the time? 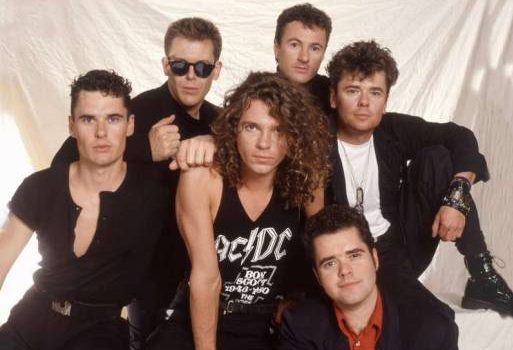 The answer, as it turned out, was “down under”. AC/DC, Split Enz ( later to morph into the great Crowded House ) with “I Got You”, Men at Work with the phenomenal #1 , all set the table for INXS. The band’s keyboard player/ songwriter Andrew Farriss, guitar-playing brother Tim Farriss, and guitar/sax man Kirk Pengilly tell of the tough and tender early days forming in the most remote city in the world, Perth Australia; surviving the one-nighters there,  in Sydney and in Melbourne; allying with a talented singer from Hong Kong-via-Hollywood,  the mercurial snakehipped Michael Hutchence; finally making the leap to America and the UK late in 1982 with “The One Thing”and “Don’t Change”, and then the title song to October 1985’s “Listen Like Thieves”, “This Time”,”Kiss the Dirt (Falling Down the Mountain)”, and the Top Five hit “What You Need”. Along with the charming memories of Andrew, Tim, and Kirk we include my rare archival  classic rock interviews with the late Michael Hutchence, who we lost tragically in November 1997. –Redbeard