Tag Archive for: “Rock and Roll Music to the World” 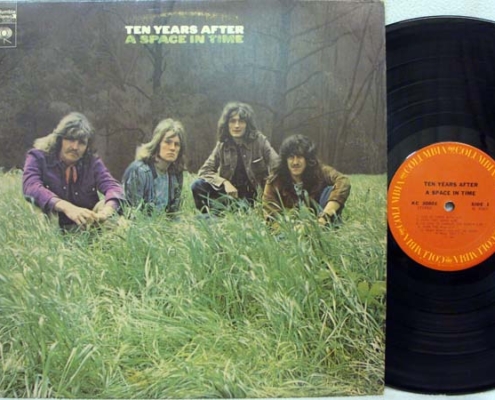 "When things get put onto celluloid, they tend to get bigger than life," the late guitarist/ singer Alvin Lee told me by way of explanation as to how Ten Years After was catapulted from the second tier of English boogie and blues by their prime spot in the Woodstock Festival   movie documentary. The band utilized that momentum to deliver their most popular album ever in late Summer 1971, " A Space in Time",  which included "One of These Days", "Baby Won't You Let Me Rock'n'Roll You", and what turned out to be their biggest hit, "I'd Love to Change the World".
https://www.inthestudio.net/wp-content/uploads/2021/08/TEN-YEARS-AFTER-Space-Time-wide.jpg 450 600 In The Studio with Redbeard https://www.inthestudio.net/wp-content/uploads/2017/01/ITS-COLOR-white-studio.png In The Studio with Redbeard2021-08-01 18:00:032021-08-15 12:18:03Ten Years After- A Space in Time 50th- the late Alvin Lee, Leo Lyons
advertisement