Watching and listening to Paul McCartney, normally the effervescently sweet post-War embodiment of that “all is well” British sentiment, deliver his sober introduction to the song “Lady Madonna” during the Global At Home: Together telecas,t was as powerful as the performance itself. Sir Paul intimated that his mother was a nurse during World War II and he shared a picture of her from the time. As he went on to dedicate his performance of the song not only to her but to the incredibly brave and dedicated men and women of medicine worldwide who are risking everything to battle COVID-19 virus, I could not help but imagine McCartney inevitably flashing back to the doctors, waiting rooms, bedsides, and heartache to the loss on April 17, 1998 of his wife and mother of his children, Linda McCartney. It took more courage than we know to sing that song last Saturday night. 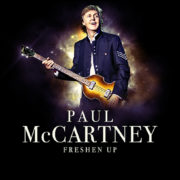 Paul McCartney- Back in the US pt 1