Rare classic rock interview with the namesake British recording engineer/producer of the Alan Parsons Project, whose 1977 second album in collaboration with composer the late Eric Woolfson was once  again based on a famous literary work ( their debut Tales of Mystery and Imagination  drew storylines from Edgar Alan Poe), this time the Isaac Asimov science fiction classic I, Robot.  It contained a rarity among progressive rock albums: a mas appeal Top 40 hit in “I Wouldn’t Want to Be Like You”, plus FM rock favorite “Breakdown” with the distinctive voice of Hollies  lead singer Allan Clarke.

By the Summer 1982, exactly five years after “the un-Dynamic Duo” ofAlan Parsons and  Eric Woolfson first broke through with I, Robot , you could just spin the FM radio dial to any album rock or Adult Contemporary radio station in America and hear various songs from the Alan Parsons Project’s sixth album, such as the hit title song “Eye in the Sky” or “Psychobabble”. Peaking on the album chart at #7,  Eye in the Sky  received a Grammy Award nomination upon its initial release only to win that Grammy for the 2017 “Best Immersive Audio Album” thirty-five years later. To date Eye in the Sky has sold more than five million copies  since release. –Redbeard 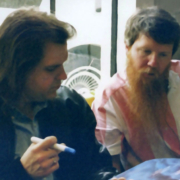