Maybe one of the reasons why U2‘s Rattle and Hum  film and soundtrack album did not receive quite the same critical worship that their preceding album The Joshua Tree  had is because all five U2 studio efforts to date had been conceived with the band’s uniquely Irish perspective. Rattle and Hum   saw the gauzy media perceptions of American culture by Bono, The Edge, Adam Clayton, and Larry Mullen jr jammed up against a Reagan-era reality that did not always ring true.

Case in point is “Love Rescue Me“, which starts out here like a country and western song in its simplicity, veers off midway with a guest verse sung by the late Bob Marley‘s son Ziggy Marley, then goes to the sanctified church, touching many of the musical bases which U2 grew to love about American music from afar. –Redbeard 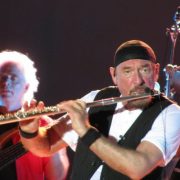