Before you can perform and record an iconic album such as The Allman Brothers Band Live at Fillmore East, first you have to actually get there. The life of a professional rock musician is synonymous with a certain nomadic existence ( the late Doors singer/ lyricist Jim Morrison is quoted as saying that Doors songs were “about life, death, and travel…”). Only the formally trained one percent of musicians can make a living staying in one location playing in an orchestra or doing regular recording studio session work, so after the standard equipment of guitars, amps, and drums are acquired, the next essential equipment for every band to graduate from the garage is a van or box truck to haul it all, for a series of road trips doing one night stands in bars, bar mitzvahs, and nightclubs. My guests were there for all of it: guitarist/ singer Dickey Betts and the late great Gregg Allman.

By July 1971, the Allman Brothers Band had migrated from North Florida to their record company/ manager’s home base of Macon GA. They too had been following the time honored tradition of long, arduous road trips from gig to gig by van. In those days, acts that scored Top 40 hits could travel by single engine plane to make far flung one nighters, and tragically some of our greatest talents of all time, including Buddy Holly, Patsy Cline, Otis Redding, Jim Croce, and Lynyrd Skynyrd all would have to fall out of the sky before artist managers, booking agents, and concert promoters finally realized that they were putting their most precious assets at risk night after night by such illogical tour routing. Without a hint of romance, the late Gregg Allman recalled those days in my classic rock interview.

The original Allman Brothers Band had to be seen and heard live to be fully appreciated, and in 1971 I was fortunate to see them twice. Now we know that year to be both the apex of the original band and yet bittersweet, a time of commercial and critical breakthrough as well as tragic heartbreak, but before either transpired, that March13 the Allman Brothers Band played multiple shows at Bill Graham’s Fillmore East music hall in New York City which were recorded. By that time the second Allman Brothers Band album Idlewild South  had breached the Top 40 sales plateau for the first time, and bandleader Duane Allman had by then recorded the now-legendary Layla  album with Eric Clapton as Derek and the Dominos. As a result, Duane Allman quickly was gaining a reputation as the premiere slide guitarist, and the band fronted by him and younger sibling Gregg Allman on vocals and organ  headlined four shows over two nights on March 13-14 at the Fillmore East, as well as the venue’s closing night in late June 1971. 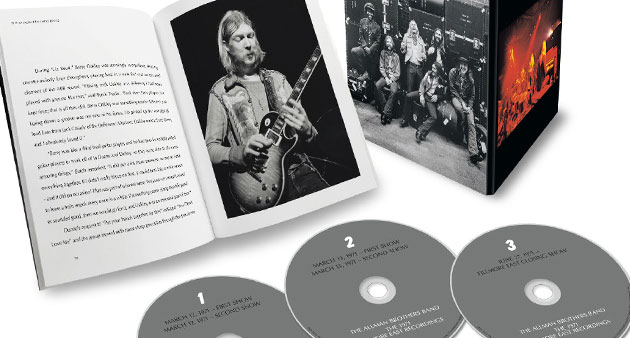 Even if you have collected the original Allman Brothers Band Live at Fillmore East (ranked impressively at #49 all time by Rolling Stone magazine on it’s Top 500 All Time list), the Eat a Peach live sides, the Duane Allman Anthologies 1 and 2,  and the Dreams  box set, there were fifteen additional live performances at the Fillmore East in 1971 that had never been released on vinyl until 2014 as The 1971 Fillmore East Recordings.  Available as  four vinyl records on the 45th anniversary of the original’s release, it is every note by the Allmans from the March and June shows. Notably, the entire first show on the first night, never available before, now comprises the entire first disc. In this classic rock interview, the late Gregg Allman and original guitarist along with Duane, former member Dickey Betts, recall the  legendary performances. – Redbeard