After back-to-back multi-million sellers The Stranger   and 52nd Street , Billy Joel could do no wrong…but that didn’t stop him from trying in March 1980 on Glass Houses.  Billy ditched the grand piano that was his signature, stripped down the arrangements to bar band essentials of jangly guitar, bass, and drums, and wrote a new batch of catchy songs including “You May Be Right”, “Sometimes a Fantasy”, “Close to the Borderline”, “Don’t Ask Me Why”, and the album’s thematic centerpiece, “It’s Still Rock and Roll to Me”.

Billy Joel took a big risk in March 1980 by following blockbusters The Stranger   and 52nd Street   with the surprisingly stripped down garage rock arrangements of Glass Houses.  But lest you get the wrong idea, it was the approach by Billy Joel that was lean, not the material. Some of his best songs are here, including the under-appreciated”All for Leyna” and the timeless “It’s Still Rock and Roll to Me”. In a rare conversation, Billy Joel and I sound like two guys outside sitting on the stoop recalling his favorite old Rolling Stones licks; seeing the Beatles perform on the Ed Sullivan Show, British Invasion bands that followed, garage rock, and the New York City punk scene that influenced his approach on the 1980 Glass Houses   album; how “play it again, Sam” is boring; New York baseball (he was a Brooklyn Dodgers fan until they moved to L.A. in 1958, when he switched to the Yankees); Harley Sportsters; getting T-boned while riding said motorcycle and almost losing his hands; and why having your brother-in-law manage you only works in The Godfather  movies. 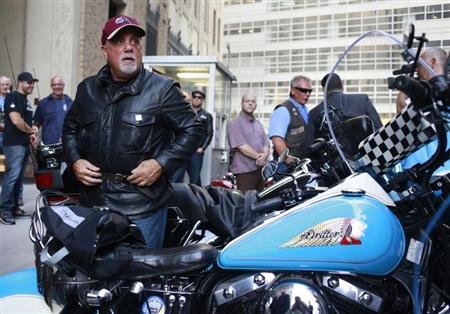 In this classic rock interview find out why Glass Houses   has sold over ten million copies, stayed at #1 for six consecutive weeks, was the 4th-best seller for the entire year 1980, and won Billy Joel a Grammy Award for Album of the Year. And Joel’s current administration as the unofficial musical mayor of New York City shows no sign of term limits any time soon. -Redbeard