Four of the millions of people who purchased the third Doobie Brothers album The Captain and Me include David, an environmental geologist father of two; his wife Carol, a petroleum engineer who runs her own oil/gas exploration company; Dan, a folk artist and Texas state park ranger; and Allen, Board Chairman of a large Dallas law firm. What do they  share in common besides friendship with me?  They all express a love to this day for the Doobie Brothers The Captain and Me , released March 1973.

For instance Allen, whose taste runs from Led Zeppelin to Miles Davis,  sat in rapt attention when I played the DVD-Audio 5.1 surround mix of The Captain and Me . David and Carol have  seen the Doobies at least three times with me in the last ten years, in venues ranging from Dallas’ House of Blues to the big 20,000 seat amphitheater there, to the auspicious Morton Meyerson Symphony Hall, singing along to “Long Train Runnin’ “ and “China Grove” while staying late to meet and chat with one of my interview guests, guitarist/singer/songwriter Pat Simmons.

I have to agree with Ranger Dan that it’s the combination of those aforementioned Tom Johnston hits along with his tasty “Dark Eyed Cajun Woman” and “Ukiah”, plus Simmons’ “South City Midnight Lady” and the mini-epic “Clear As the Driven Snow”, which allows us to salute The Captain and Me   nearly five decades on. As Johnston and Simmons continue to take the Doobie Brothers on  a fiftieth anniversary victory lap of North America , and speaking on behalf of these four bright, educated, creative, successful yet diverse Doobie fans, congratulations to the Doobie Brothers on their induction into the Rock and Roll Hall of Fame! – Redbeard 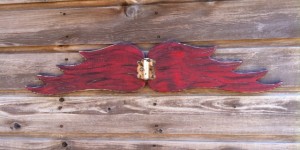 (I could not help but notice how much these angel wings by Dan Taylor, made from recycled barn wood hinges, resemble the California condor wings in the Doobie Brothers’ logo)

More Live Tracks...
advertisement
In the Studio 1988-2018: Thirty Years of the Greatest Rock Stories Ever Tol...