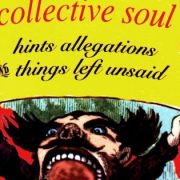 The story of Collective Soul emerged a little more than twenty-five years ago from the basement of Stockbridge Georgia songwriter Ed Roland‘s parent’s basement. It is not the first time that a song demo such as “Shine” was recorded at home by an aspiring songwriter, only to escape and then find itself in search of a band (think Tom Scholz and Boston). But after selling over a million copies of the album Hints, Allegations,& Things Left Unsaid   primarily on the phenomenon of “Shine” alone, the second album in March 1995 under the name Collective Soul   containing “Where the River Flows”,”Gel”,”December(Spit Me Out)”, and the gorgeous “The World I Know” is one of the strongest sets of melodies and tasteful arrangements to come from the era. –Redbeard