The many musical myths surviving the Moody Blues’ groundbreaking November 1967 second album, Days of Future Passed , were variously confirmed, corrected, and embellished by my guests Justin Hayward and John Lodge here In the Studio in this classic rock interview. Among them:

-After singing “Go Now” in 1964, lead singer Denny Laine left the Moody Blues with the name, one hit, and 5,000 British pounds in debt to their record company. Young unknowns Justin Hayward and John Lodge were added. Hayward claims that he got the gig “…because I had an amplifier!”

-The Moody Blues did not have a record album contract with label Decca, just a deal for a few single sides.

-Reduced to playing supper clubs, the band had to sell their equipment van to survive.

-Hayward, Lodge, drummer Graeme Edge, flautist Ray Thomas, and keyboard player Mike Pinder could not afford recording studio time, so in an effort to recoup their investment, the label allowed the band to record at times when the studio was vacant, usually a few hours in the middle of the night.

-The first recording of Justin Hayward’s “Nights in White Satin” by the Moody Blues was for a BBC radio program. After the one-time broadcast, the network reused the tape by recording over it, effectively destroying the only recording of “Nights…” at the time.

-The Moody Blues did NOT record with the London Festival Orchestra on Days of Future Passed. “They only played in the gaps between our songs,” points out Justin Hayward. 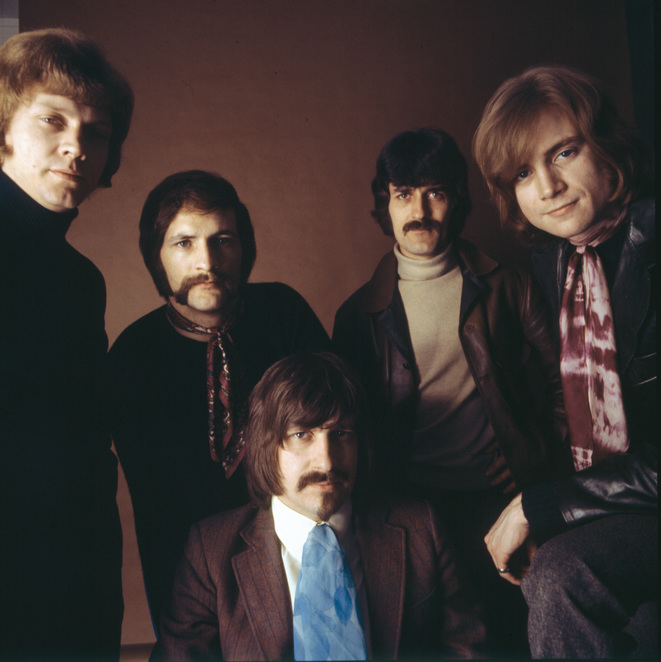 -Though technically not the first rock opera( there are no characters ), the album’s song cycle of a 24-hour day is one of the first rock concept albums, and is widely cited as the dawn of Progressive Rock.

-Some 70 million album sales and half a century later, the Moody Blues have been able to replace their van, but  only this year have  been invited to park it permanently at the Rock and Roll Hall of Fame. You  helped correct that inexplicable omission by voting for the Moody Blues in for the Spring 2018 ceremony.

It was indeed our pleasure  to present the first of many exhibits to make the case for the Moody Blues finally to be inducted into the Rock and Roll Hall of Fame in 2018: the golden anniversary of Days of Future Passed ! Moody Blues mainstays Justin Hayward and John Lodge document the fascinating story of a true Hail Mary pass to avoid abject poverty and starvation, resulting not only in timeless hits “Tuesday Afternoon” and “Nights in White Satin” but also igniting a musical movement, Progressive Rock, that combined the psychedelic sounds of 1967 with the orchestral grandeur and literary purpose of the classics. –Redbeard

Todd Rundgren- Can We Still Be Friends?- Ridgefield CT 2015