“I’ve been waiting for this moment all my life …”

As the summer sun set to the west of the massive JFK stadium in Philadelphia teeming with 100,000 people for Live Aid US, I stood back of center stage about ten feet behind Phil Collins who was seated at a black grand piano. Beside me looking over his 3″x 5″ recipe cards with notes for stage announcements stood Jack Nicholson. Collins, fresh off the Concorde supersonic jet which had conveyed him from his earlier performance at the London Live Aid concert, sang his surprise movie hit “Against All Odds” accompanied only by the piano as hundreds of multi-colored balloons were released into a cloudless blue sky. Then Phil performed “In the Air Tonight” with 100,000 strong subbing for the percussion.

At the conclusion of these two solo performances, Phil Collins then introduced Jimmy Page, Robert Plant, and John Paul Jones as Collins scrambled behind a drumkit and proceeded to play in the Led Zeppelin reunion! It had been that kind of day, incomparable really. –Redbeard 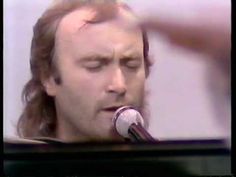