My exclusive classic rock interview with Eric Clapton covers a lot of ground simply because no matter what era or decade you pick since 1965, EC was there in a remarkably consistent, influential way: Yardbirds; John Mayall’s Bluesbreakers;  Cream; Blind Faith with Steve Winwood; Derek and the Dominos with Duane Allman. And yet he has made a long string of mostly highly-regarded solo albums as well dating back to his first in 1970. Friends and musical peers including George Harrison, Pete Townshend, and Phil Collins helped to revitalize Clapton’s career through periods of drug abuse and turbulent love affairs in the early Seventies, and again in the mid-Eighties. 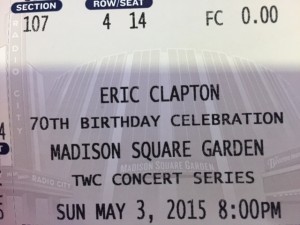 This is part one of my two-part career-spanning interview with Eric Clapton in which he discusses the thirty year period covered by the  multi-disc anthology Forever Man,  exploring such topics as trading in his longtime band on 1985’s Behind the Sun  sessions for a West Coast group of studio all-stars headed up by fellow Brit Phil Collins; his uncanny knack  for finding complementary songs by others (dating back to his first solo album in 1970) which showcase his musical gifts; why he modestly titled his 1989 multi-million seller Journeyman;  and how he purported to fit a half century of Slowhand  into a series of two hour concerts  in London’s Royal Albert Hall each year. –Redbeard