Driving halfway across America in late Winter 1976 is when I first realized just how massively popular The Eagles truly had become. This was long before 21st century satellite radio, so driving 1400 miles from Lincoln NE to Hartford CT meant re-tuning the car radio about every seventy-five miles or so to a new local station. And every one, whether AM or FM, big city signal or small, were playing “One of These Nights”,”Lyin’ Eyes”, and “Take It to the Limit” as if their FCC licenses depended on it! All three of those hits from the album One of These Nights went Top10, with the album topping the Billboard sales chart and eventually winning a Grammy.

So for the Eagles next effort, did the band have anything prove? No way. Had their four platinum and multi-platinum albums in a row set the expectations bar exceedingly high? You bet, yet Don Henley, Glenn Frey, Randy Meisner, Don Felder, and newest guitar player Joe Walsh ( replacing Bernie Leadon ) saw a uniquely American epic story unfolding all around them about which they felt compelled to tell via “Victim of Love”,”New Kid in Town”,”Life in the Fast Lane“, the emotionally devastating “Wasted Time“, and the enigmatic title song. 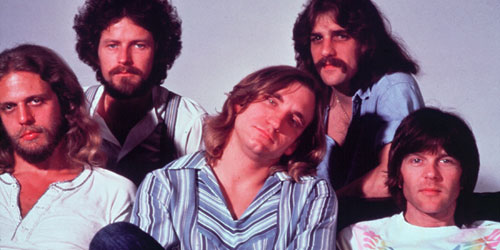 Hotel California rushed out the first week of December forty years ago, and the impressive combination of cinematic vision, songcraft, and high tech production seemed to be coming from a place in the near future to which the rest of rock would have to catch up. It is indicative of the incalculable loss to music and pop culture that was the January 2016 death of Eagles co-founder and visonary Glenn Frey who, along with Henley & Walsh, have the last word here on Hotel California at check-out time. –Redbeard

Billy Squier Biggest”Don’t Say No” Has Sad John Lennon Me...
Scroll to top