Unquestionably and uniquely in a category all its own, Jethro Tull‘s 1972 epic Thick As a Brick   is the only album in music history to attain #1 sales on Billboard containing only one song, albeit 43 minutes long! And as you will hear from my guest, composer/singer/flautist Ian Anderson, Thick As a Brick‘s ultimate irony   is that the album was conceived by Anderson as a total spoof of music critics purporting to ascribe imaginary meaning to Jethro Tull’s preceding Aqualung   album, as well as a send up of rock’s progressive darlings at the time.

RedBeard:   As I was going back and researching our many previous conversations about your Jethro Tull body of work, I noticed that you’re very careful never to refer to Thick as a Brick,      the original, as a rock opera.  Why not?

Ian Anderson: Well, it was a rock rambling, really, it was supposedly a spoof, a parody aspect of the original Jethro Tull Thick As a Brick.  But it was supposed to be written by an eight year-old boy, a want-to-be poet, who is having, I suppose, slightly beyond his years of rambling pre-puberty moment of gushing forth with a  sort of grandiose ideas, and it was a fun thing.  This was the year of Monty Python, this was a year of the development of quite surreal British humor into an international phenomenon.  So it was quite timely in the sense that this particular album should be a spoof,  a parody, a send-up, a complete fiction into which people quite readily bought,  usually knowingly, but sometimes they didn’t get the joke and took it all absolutely seriously.  But for the most part I think people understood it was a British humor thing.  And my feeling back then was that it was a timely event.  It wouldn’t have worked a year or two earlier or it wouldn’t have worked a year or two later.  Because by then we were into a major change of music culture  in the U.K. , particularly as the so-called punk year or two started to come around.  So this was not meant to be a rock opera , it was meant to be the ramblings of a young, precocious mind.  And I never really thought about it as being in any way a parallel perhaps to something like (The Who’s) Tommy  or even having the slightly mysterious ( Pink Floyd ) Dark Side of the Moon  kind of aura about it.  This was just whimsical, light hearted fun,  although  it had its serious moments embedded in there too.  But no, never a rock opera, just a bit of rambling surreal British humor. 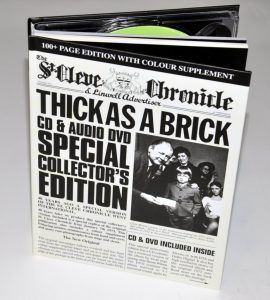 RB:     You  told me previously  that Thick as a Brick was conceived as a direct response to many critic’s assertions that Aqualung was a concept album, something that you have consistently denied ever since.  And that the original Jethro Tull #1 seller Thick as a Brick was this clever elaborate send-up of a concept album.  How long did it take you to realize that not everyone got the joke?

IA: Well, I thought when I wrote the album prior to its release that it would be divided down the middle between those that got the joke immediately, even just reading the album cover,  they would know that there was a joke there.  And that other people wouldn’t immediately get it but most of them would, but not until after they parted with their money and actually bought the thing.  I’m just kidding.  But the reality was I suppose in some countries they never did get the joke, maybe not even to this day.  But I think it was immediately apparent in the U.K., maybe in Australia, maybe in one or two other places, it took a little longer maybe in the USA for some people to realize that it was a parody, it was a spoof and in some places as I suggested like Japan, or in countries that are notorious for a different culture, perhaps the inability to see humor in the same way as most of the rest of us.  But I don’t want to single out the Japanese, let me toss in the Germans, the Swiss and the Austrians as well ! But it maybe just wasn’t in their culture to see that kind of a humor at face value, it took ‘em awhile to figure it out.  If indeed they figured it out at all.  And it was interesting doing the multi-lingual translations of the lyrics of the 2012 Jethro Tull album Thick as a Brick 2, because I was working with Germans, Spanish, Italians, Russians, Czech,  so in a way trying to explain some of the elements of my often wordy and sometimes obscure lyrics… 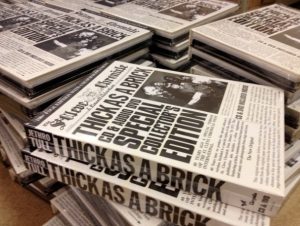 IA:       … I did encounter  some deep levels of conflict with culture clash.  Ya know in the sense that it didn’t register, they didn’t have a word, or words to describe a certain thing that we understand, or might easily translate into Italian or Spanish, but the Germans didn’t have a word for it.  So yeah, it was kind of interesting, I think because I deal in words, that’s a big part of what I do, I’m quite fascinated in the semantic confusion that can so easily result and when you think about that , plays out in world politics.  How does ( German Chancellor) Angela Merkel who doesn’t speak a huge amount of English, how does she get the nuances of a conversation with the UK Prime Minister  or U.S. President? I mean, there are always a danger that these little elements of language can confuse with even literal translations working, ya know. I’m not suggesting we’re facing World War III, but it’s easy to see how people could get their knickers in a twist.”