As it turned out, In the Studio  episode #13 was a very lucky number for us in Summer 1988 because we were able to feature Def Leppard,  the band which pretty much lit the match for the Pop Metal Eighties explosion five years earlier with Pyromania, at precisely  the time when they were cresting worldwide in popularity with the blockbuster follow up, Hysteria.

It had been a wonderful personal experience to watch the sweet, kind, grounded guys in the Sheffield England band Def Leppard grow up literally in public on their way to induction on the first ballot into the Rock and Roll Hall f Fame. I had the great pleasure of meeting and interviewing several of the band members in Memphis on their first U.S. tour supporting their debut, On Through the Night,   when not one of them was out of their teens (drummer Rick Allen, at age 15, was working in the country completely illegally!).Their delight in being on the same bill as their heroes Thin Lizzy and Scorpions playing in America back then was positively puppy dog endearing, but three years later with their third album, February 1983 release Pyromania,   suddenly the pecking order inverted almost overnight as the album went on to sell more than ten million in just the States, simultaneously setting the pop metal path that countless bands would follow throughout the 1980s. Def Leppard lead singer Joe Elliott, bass player Rick “Sav” Savage, and late ’82 addition on lead guitar, Phil Collen, joined me In the Studio   for Pyromania‘s   anniversary.- Redbeard

(with Joe Elliott backstage in Dallas) 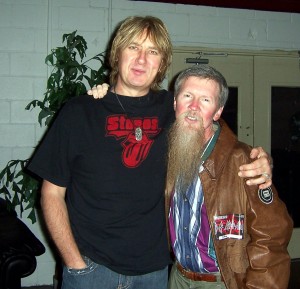 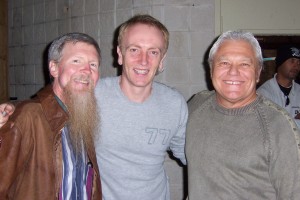 (with Phil Collen(c), In the Studio London correspondent Dave King(r)