From 1984 until 1990 it was a dismal time for Rolling Stones fans with the band on indefinite hiatus, but two great things emerged from Mick Jagger’s haunting of New York City’s rock clubs  looking for suitable replacements during that period. Jagger launched the careers of Vernon Reid and Living Colour, and separately, an unknown six stringer  Long Islander-by-way-of-San Francisco fret phenom named Joe Satriani.

Growing up the youngest of five kids on Long Island in the late 1950s and through the Sixties, Joe Satriani credits his mother’s excellent record collection with exposing him to Wes Montgomery as well as Jimi Hendrix. Satch fans from Mick Jagger to Sammy Hagar & Chickenfoot owe a debt of gratitude to Joe’s oldest sister, Carol, who donated her first paycheck as an art teacher to buy little Joe his first guitar, a Hagstrom 3, for $126.

Recorded for $13,000 which he financed on his personal credit card, the mult-million copy sales of Joe Satriani’s 1987 second all-guitar album, Surfing With the Alien , effectively closed an era in contemporary music where the rock “guitar god” had become self-consciously cliched, supplanted for the first time in rock music history by the versatile electronic keyboard. Joe Satriani’s Surfing with the Alien  didn’t merely open the door for the re-emergence of rock guitar, it kicked it in.  –Redbeard 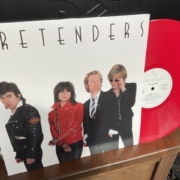