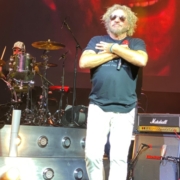 After years of struggle as the undercard rock palooka who could take a punch and never go down, in 1982 Sammy Hagar answered the bell  and came out swinging, scoring a technical knockout with his first mainstream hit “Your Love Is Driving Me Crazy” from his seventh solo album Three Lock Box. Then in 1987 Sammy won by a knockout with his solo album I Never Said Goodbye, at #14 his highest charting album ever, and that while being newly installed as Van Halen‘s lead singer. Hagar reveals some deeply held intensely personal insights into what has driven him to this day as the leader of the superstar bands Chickenfoot  and now Sammy Hagar & the Circle.- Redbeard

The WHO – Behind Blue Eyes- Toronto Dec 1982
Scroll to top