If you are like me and hold Rock and Roll Hall of Fame inductee Todd Rundgren‘s Something/Anything?  in high esteem, you will never be able to  listen to songs such as “Cold Morning Light” in the same way ever again after hearing the insights in this in-depth conversation. “My biggest songwriting influence up until that time was Laura Nyro, who was also a heavily R&B-influenced artist. So it was all connected to R&B in one way or another.”

Todd Rundgren‘s third solo album  Something/Anything , released fifty years ago, is an impressively diverse collection of styles,  incorporating a dazzling array of pop music influences  in a cascade of twenty-four songs, all written by Todd including tasty power pop (“Hello It’s Me”,”I Saw the Light”,”Couldn’t I Just Tell You” ), sweet soul ballads (“It Wouldn’t Have Made Any Difference”), and flat-out guitar god showcases (“Black Mariah” ). And 75% of the musical arrangements are all played and sung   by Todd Rundgren who, at the time of Something/Anything‘s release in 1972, was a ripe old 23 years of age.Even before the February 1972 release of Rundgren’s third solo album Something/Anything , Todd was being hailed by some rock critics as a wunderkind, that rare combination of left-brain creative and right-brain analytical talents, able to write charming pop lyrics, blessed with an innate ability to play practically any musical instrument, while adept at understanding and utilizing the technical intricacies of the modern recording studio. Something/Anything would have been a monumental achievement under any circumstances, yet Rundgren admits in this classic rock interview to neither reading nor writing music! 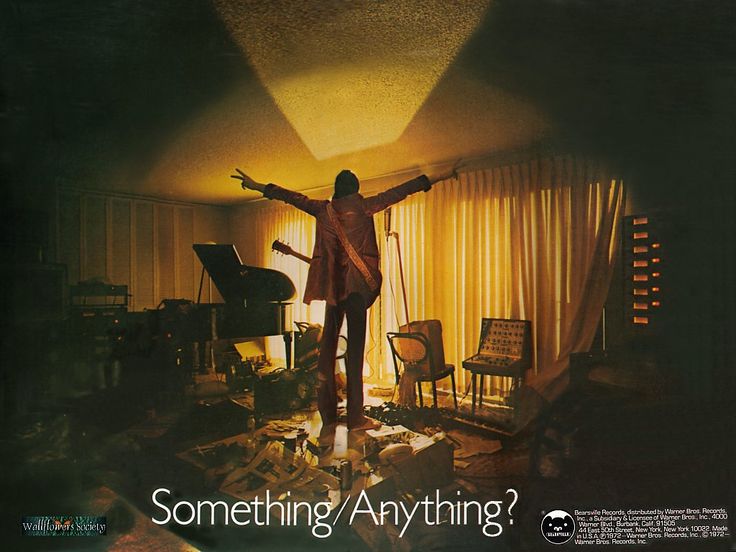 With every development in the technical evolution of music recording, what Todd Rundgren did and the way that he did it entirely on his own, some of it not even in a professional recording studio’s facilities or assisted by technical staff, only serves to continue to elevate this collection.  And now prior to his long-deserving induction into the Rock and Roll Hall of Fame, Todd joins me In The Studio for this #29 charting album which Rolling Stone magazine counts as #173 on its list of the Top 500 Albums of All Time.  – Redbeard