In July 1981, Stevie Nicks already was in arguably America’s most popular band, Fleetwood Mac, but her first solo album then, Bella Donna , took her career to another level entirely, a fact that was by no means guaranteed and which came at some cost.  The album was the #1 seller on Billboard‘s Album Sales chart by September and sold its first million copies by October. Stevie spells it all out quite candidly in my classic rock interview while revealing the stories and characters behind “Edge of Seventeen”, “Leather and Lace” with Don Henley, and the timeless duet with Tom Petty on his “Stop Draggin’ My Heart Around”. Join double Hall of Fame inductee Stevie Nicks with me here In the Studio  for the Bella Donna  fortieth anniversary.

Rock and Roll Hall of Fame induction is coveted, and serves as validation of a life of artistic struggle. But until Stevie Nicks walked out on the stage in March 2019 to accept her induction for her solo career, no woman had had the honor bestowed upon them twice. Long before Stevie Nicks became a star as a solo performer; before she and her musical partner ( then lover) Lindsey Buckingham helped to transform the British blues rock band Fleetwood Mac into one of the top-selling groups of all time; even  before her professional recording debut in 1973 on the album Buckingham Nicks , Stephanie Lynn Nicks was living a real- life version of the Glass Menagerie , as you can hear in my classic rock interview.

Stevie Nicks: “I remember exactly what it was like to be 20.  I mean, I was a cleaning lady, I was a waitress. I had problems… I mean, Lindsey (Buckingham) and me together trying to figure out how we’re going to make it in the music business.  And this is the only thing that either of us wanted to do. And what if we didn’t we make it ? I had to go to school.  And he didn’t so… that, ya know, he had all this time.  I didn’t have much time.  I mean I was I was an emotional wreck at 20. Oh, yeah. I was an emotional wreck at 18 because that’s when I started singing in a band with Lindsey and we played three and ½ solid years up and down  the San Francisco peninsula  and opened for all the big huge bands in that special moment in time that was Haight-Ashbury and San Francisco.  Where everybody came.  And so I got to stand and watch from the side of the stage.  Everybody.  You name ‘em,  we opened the show for ‘em.  So I got like first hand experience, it’s the only reason I was able to walk into Fleetwood Mac without having a nervous breakdown.  And walk out center front stage to the center mic and not just, ya know, collapse and faint, because I had already played in front of 75,000 people.  Standing in the middle of the stage as lead singer. 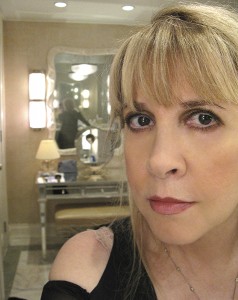 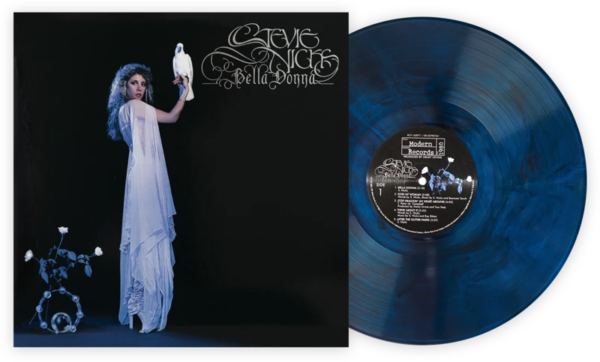