If one were to attempt to carve in three dimensions the zeitgeist of the Summer of Love in 1967 America, you would have to chisel the Jefferson Airplane‘s second album Surrealistic Pillow  into any Mt. Rushmore of Rock containing three other  classics of the time. While The Doors  debut and Sgt.Pepper’s… showed us where rock was heading, and Are You Experienced  by Jimi Hendrix Experience seemed positively from some future dimension, Surrealistic Pillow by the Jefferson Airplane had LSD-inspired songs and sounds unapologetically butted up next to breezy vocal singalongs clearly influenced by the hit hootenany pop style of the Mamas and the Papas. It is that anachronistic Jekyll-and-Hyde crazy quilt that makes Surrealistic Pillow  a more representative  snapshot, possibly, than any recording of its time. Jefferson Airplane co-founder singer/songwriter Marty Balin, Grace Slick, and rhythm guitarist/songwriter Paul Kantner, the latter who passed away one year shy of  Surrealistic Pillow‘s fiftieth anniversary, joined me for this landmark recording. – Redbeard

Deep Purple-Who Do We Think We Are?-Ian Gillan, Roger Glover 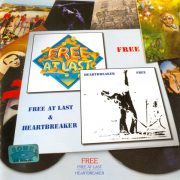